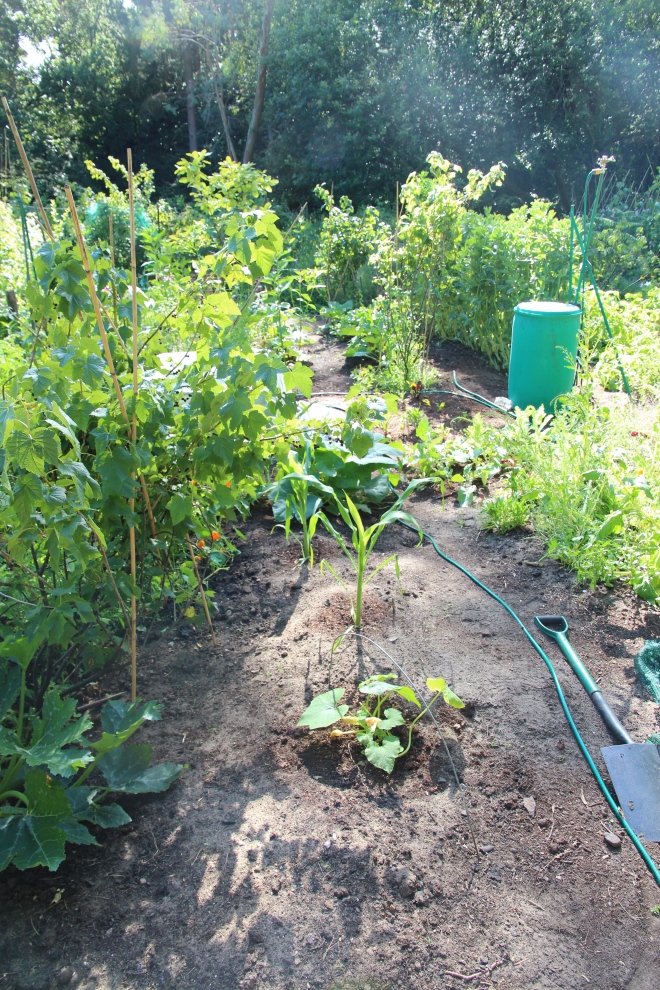 Sweetcorn (Zea mays convar. saccharata var. rugosa), is a variety of maize with a high sugar content. It is the result of a naturally occurring recessive mutation in the genes which control conversion of sugar to starch inside the endosperm of the corn kernel. Unlike field corn varieties, which are harvested when the kernels are dry and mature (dent stage), sweetcorn is picked when immature (milk stage) and prepared and eaten as a vegetable, rather than a grain.

The cultivation of corn as maize began over 8000 years ago in Mesoamerica, a geographical area which includes central and southern Mexico, and Central America. Corn was first domesticated from teosinte (Zea mexicana), an annual grass native to this region. Wild teosinte mostly has value as a fodder plant, as it provides very little edible seeds. The first archaeological evidence of domesticated corn comes from the San Marcos cave in Tehuacan and the Guilá Naquitz cave in the state of Oaxaca, Mexico. The corn in San Marcos cave is dated to over 5,000 years ago. The cobs from the Guilá Naquitz cave were dated to over 6200 years old. Humans first domesticated corn by selecting the teosinte plants that had the largest amount of edible seeds until they eventually provided a substantial food source. In the process, humans have transformed corn into a plant that can no longer self-sow and modern corn now requires breaking the tightly bound cob to remove the seeds. Wild teosinte, however, is very fragile and the seeds easily fall off and grow new plants. Without human interaction modern corn would probably cease to exist.

The Iroquois, Native American tribes, gave the first recorded sweetcorn, called ‘Papoon’, to European settlers in 1779. It soon became a popular food in southern and central regions of the US. Open pollinated cultivators of white sweetcorn started to become widely available in the US in the 19th century. Two of the most enduring cultivars, still available today, are ‘Country Gentleman’and ‘Stowell’s Evergreen’. Sweetcorn production in the 20th century was influenced by the following key developments: hybridisation allowed for more uniform maturity, improved quality and disease resistance, and, in 1933 ‘Golden Cross Bantam’ was released. It is significant for being the first successful single-cross hybrid and the first specifically developed for disease resistance. Open pollinated (non-hybrid) corn has largely been replaced in the commercial market by sweeter, earlier hybrids, which also have the advantage of maintaining their sweet flavour longer.

There are different varieties of sweetcorn – old types and supersweet types as well as mini types. Choose only one variety or they cross pollinate and make a gross hybrid that you don’t want.

Sow in pots as early as March or as late as May, indoors. I use tall yoghurt pots filled with compost. Keep them in warm temperatures to grow with plenty of water and sunlight. Plant them out when they are about 7cm tall and the frosts have most definitely passed, May or June, 30cm apart. Sweetcorn is wind pollinated so plant them in clustered groups (picture the fields of corn grown on the country farms around Britain, all packed together) rather than rows to maximise pollination. Plant in soil that has been prepared with compost and well-rotted manure. I keep feeding mine with Blood, Fish and Bone and well-rotted manure or a liquid feed throughout the season to encourage the growth of the corn itself. Keep well watered in any dry periods. To increase pollination, try brushing the dusty pollen off the tops of the sweetcorn onto the tassels – this is where the corn will grow if pollinated. The tassels on the plant will turn yellow if fertilised. The cobs are ready when the tassels turn dark brown, July-September. To check, peel back the green covering and pierce a thumbnail into one of the niblets – if the liquid that is released is milky, your sweetcorn is ready. If it is clear, leave if a little longer but check daily. 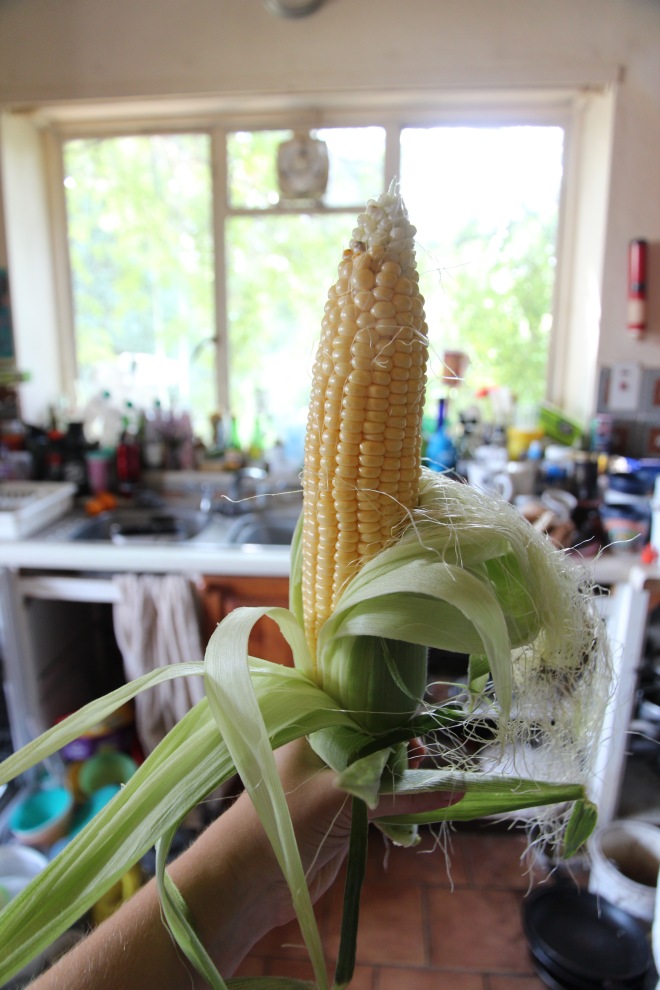 The aim is to harvest sweetcorn in its prime. The sugars convert to starches rapidly once the corn leaves the plant and the taste will only become poorer as time goes on – same for asparagus and peas. Have the pan of boiling water ready, pick and plunge your cobs straight in. Or freeze them immediately (it stops the sugar/starch conversion process).

The only problems with sweetcorn are they take up space, they might not pollinate as reliably as insect pollinated plants (it will be very weather dependent) and if you have a problem with mice you might need to consider some protection.

For companion planting, consider the ‘Three Sisters’ from the USA: sweetcorn, beans and pumpkins. My first year I grew pumpkins with the sweetcorn. Last year I grew lettuces and radishes between them. This year I am considering a variety of cucurbits because they both enjoy the sunny conditions – courgettes, pumpkins and squashes, that is.

To cook and eat sweetcorn: it can of course become ‘corn on the cob’ – boil, grill or barbecue and slather in butter and hand them out for people to chew off the little gold nuggets. To remove the kernels from the cob, boil for a few minutes in boiling water (don’t add salt, it hardens the kernels), get a sharp knife and scrape them off into a bowl and serve.

They are lovely with any meal that includes boiled veg, salads, mixed with tuna and mayonnaise is a traditional one, delicious with peas and baked potatoes mashed with butter, they are a traditional vegetarian option for the barbecue – try spreading some chill sauce over the top after grilling for a spicy taste. I think they are delicious also in a stir fry and a great addition to Egg Drop Soup with Vegetable Stock. I offer you the other recipe that springs to mind when I picture sweetcorn – my mum’s sweetcorn fritters. 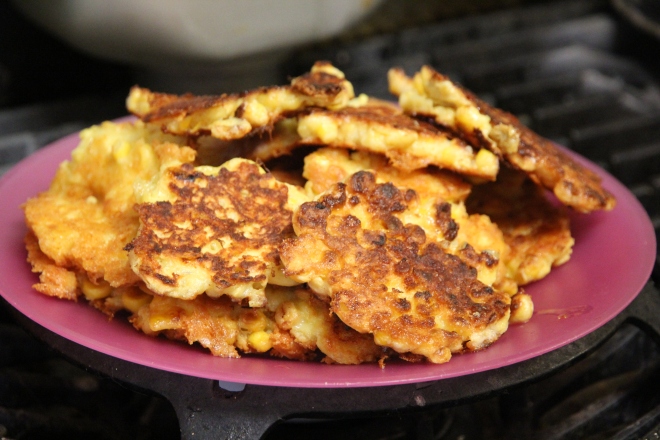 (Makes enough to serve 4 people a few each) 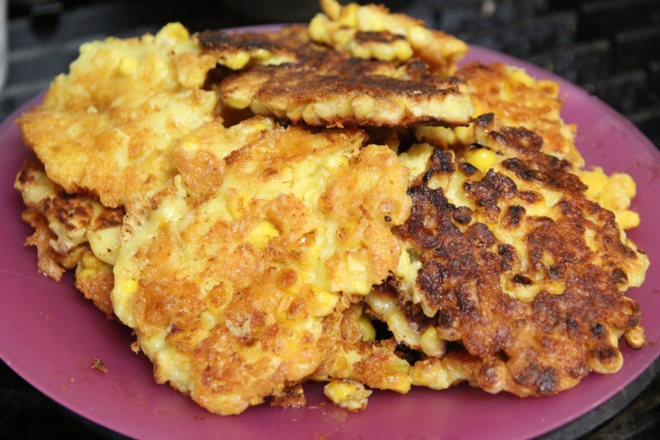 South East of England. Family owns pets: dogs, cats, chickens, ducks, kune kune pigs (not for eating) and bees (that we never get any honey from). I am vegetarian because I have never liked the taste or texture of meat but my family do eat it so I will be including meat recipes on this blog. I work in our vegetable garden alongside my mum. Our dream is to be self-sufficient. I hope that this blog inspires, informs and is found interesting for any readers. I will be discussing anything to do with gardening, growing, working on the land and food, including recipes as I go along. Please feel free to ask any questions relating to the blog. View all posts by thekitchengardenblog

One thought on “Sweetcorn”