So I didn’t get a lot planted this year because I was away from home for a couple of months, but we did get the potatoes in and the beans are being harvested now – last  year’s beans!

We left our bean roots in the ground rather than dig them up by accident three years ago. We grew other things in the same trench over the winter so it was heavily guarded with double portions of horticultural fleece that protected it from the frost. We were in awe when the next spring, our old beans grew back. Since then, we have tried to protect all of our bean roots that we leave in the ground. This year we have a few that have re-grown for their third harvest, we have more that our on their second, and my mum managed to sow a few extra this year in another trench while I  was absent.

I have been enjoying delicious beans boiled for dinner almost daily for a week now. I had to of course have them as part of my favourite dinner of all time – Baked Potato, Cheddar Cheese, Baked Beans and Runner Beans. 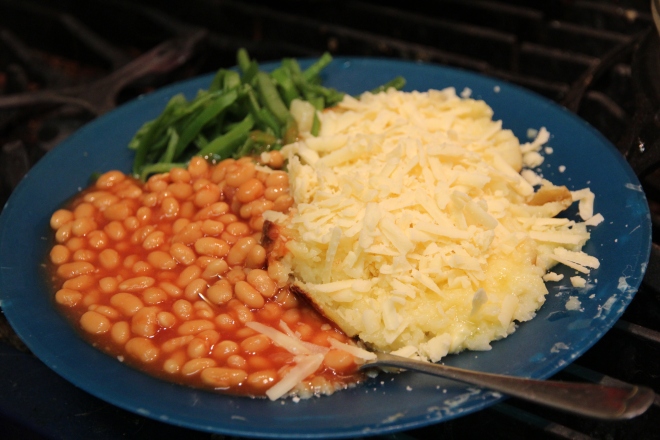 Preheat your oven to 200C. Cut out slug damage (if homegrown potatoes) or prick holes in the potato, to let the steam escape while cooking. Bake the potato in the oven for an hour, I like to leave mine in for another half an hour so that the skin is really crispy.

Boil a pan of water and add the sliced runner beans, turning the hob down to a low flame. Remove from the heat after about 8 minutes, drain.

Heat the baked beans in a pan over a medium flame. Remove from the heat once hot.

Remove your potato from the oven, cut in half and mash a generous amount of butter into each part. Add the runner beans and the baked beans to the side and sprinkle cheddar cheese over the top of the potato and butter.

South East of England. Family owns pets: dogs, cats, chickens, ducks, kune kune pigs (not for eating) and bees (that we never get any honey from). I am vegetarian because I have never liked the taste or texture of meat but my family do eat it so I will be including meat recipes on this blog. I work in our vegetable garden alongside my mum. Our dream is to be self-sufficient. I hope that this blog inspires, informs and is found interesting for any readers. I will be discussing anything to do with gardening, growing, working on the land and food, including recipes as I go along. Please feel free to ask any questions relating to the blog. View all posts by thekitchengardenblog

One thought on “Beans Means Heinz”